With the release of Super Mario 3D Land for the 3DS today we thought we’d take a look at the top ten Mario levels. Did you know Mario has appeared in over 200 video games since his creation? So picking ten is very tough. We’ve decided to stick with Marios platforming adventures rather than his karting, golfing and plumbing games. Leave your comments at the bottom, have we missed any great levels that should have made the list?

The first level in the iconic Super Mario 64. One mention of this level will quickly have everyone whos played it humming the theme tune and thinking of ways to get to the top of the mountain. A great training level that teaches you to walk, run, jump and even fly, its just a playground filled with things to do. From cannons that shoot you into the sky to turtle shells you can ride on you can spend hours just messing about. Bright graphics, a huge open space and lots of different characters make this a fun introduction to the awesome world of Super Mario 64. 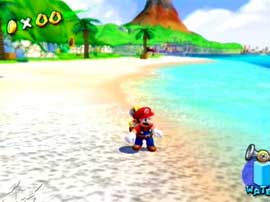 We love Super Mario Sunshine for the Gamecube. It has its flaws but one thing it captures perfectly is summer and being down by the beach. If we could live in a virtual world Gelato Beach would be up there. Featuring a huge beach filled with melons, a nice calm sea, green hills and solar panels you can play with we could relax here all day. Even ten years later it graphically looks like it could have been released today as the calm ocean laps at the beach and huge caterpillars walk around. You can feel the warmth and summer fun in this level so much and we hope to go back there again someday. 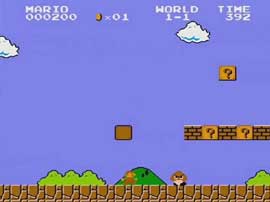 What would a top ten list be without this level, the level that started it all. If you got anyone to draw a mario level, they’d draw this and probably do it perfectly from memory. That first mushroom that teaches you how to run after it, the pipes that allow you to find hidden rooms and your first introduction to the goombas. Its almost the perfect level, simple yet deep allowing new comers to enjoy it whilst allowing experienced gamers to defeat it in the quickest time possible.

Super Mario Bros 3 is full of great levels, in fact its probably the best 2D Mario game out there. But 1-2 is a classic. We love sliding down on our bottoms as goombas fly off as we hit them. Jumping on top of music notes, especially that tricky one that holds a power star making you invincible. Its just a great level for getting Mario running at speed, timing jumps perfectly and hitting the carefully placed enemies. 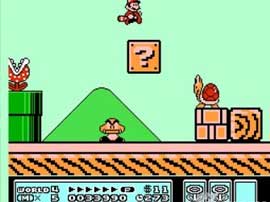 Another SMB3 level and this time its Big World. At the time this was ground breaking, as you start the level and everything is over sized. Clouds are three times as large as are the goombas and turtle shells. You really do have to play the game differently as Mario has more trouble jumping on enemies heads. It flipped Mario’s world almost upside down and makes a nice change from the other levels you’ve played up to this point. 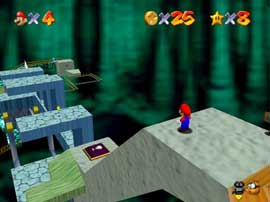 Most of Mario 64s levels let you tackle things in your own time and if you fail you can try again with at worst a slight loss of life. But the levels that lead to bowsers domain require all your gaming skills. Everything early levels taught you about jumping, wall jumps, sliding and cartwheels will be pushed to the limits. If you fail, its a life gone and back to the start. This is pure platforming at its finest, requiring pure skill to defeat. But once you do it, you will feel so overjoyed that you’ve totally forgotten you now have to defeat Bowser. PErfect 2D platforming in a 3D world.

One of Mario 64s hardest levels as you have to contend with lava everywhere but its a joy to play because whilst is difficult it is never unfair. It can be incredibly tense as mario hits the lava and bounces as you try to guide him towards coins or land before your health runs out. Some wonderful enemies such as the eyeballs that follow you around or the horned bombs that like to push you off the edge compliment the level wonderfully. 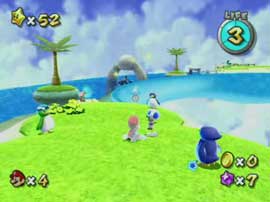 Just like Gelato Beach this has a wonderful atmosphere. The water is clean and the graphics are amazing. It really has a summer holiday feel to the level and whilst it involves a lot of underwater sections these are never frustrating thanks to turtle shells that propel you through the water and the depth meaning running out of air never happens. Add in some penguins living on a sunny beach and its a cute, happy fun level.

A remake of sorts from the ship level of Super Mario Bros 3, this level is tough. Bombs flying all over the screen as the screen scrolls along and all sorts of enemies popping up. You have to be on your guard as everything is aiming at you all at once. Whilst difficult it provides a huge amount of satisfaction once completed. Its difficulty matched with its pace make this one of the most memorable Mario levels out there. 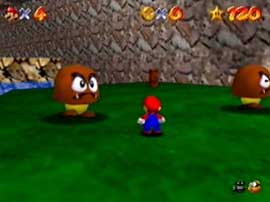 Two levels in one, this takes the feel of Huge World from Mario Bros 3 and turns it on its head. Before you even enter the level you are tricked by the perspective of the two entrances as you run up to a door and the castle feels like its getting smaller or bigger. Once inside you can use warp pipes to change if you are in tiny island or huge island which means some jumps are almost impossible or super easy. Its a great level because of the way it messes with sizes. We can’t forget the koopa race either which is brilliant.


Can't Find What You're Looking For?

Casually Hardcore is the No.1 spot for premium Video Game T-Shirts & gamer clothing. Create personalized shirts and gifts for gamers by gamers.